Starkey is home and well

Little Strakey is home and well. We are not 100% sure what caused him to get “Colic” but we have eliminated a few things in his environment and he should be fine now… What a relief.

Starkey the mini horse is sick

It seems that our little mini horse Starkey is sick. We had to take him to Purdue medical center on Saturday. Here is Joan of Darks blog on everything. Send him good thoughts…

We are renaming the “3rd Panel” to “Family Circus Continued”. That way people can find it if they want.. Sorry we missed last week. It i Faris’ fault. Well actually it is my fault. I didn’t do mine. So what. I guess I am sorry . whoop a dee doo dah.
Here is this weeks.. 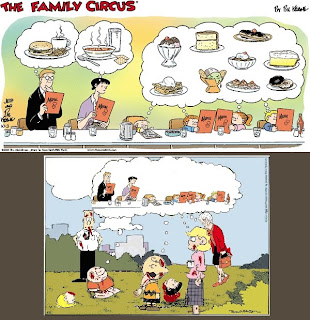 Ok I am late posting this because I was busy announcing this weekend at the North Central 2010 Roller Derby tournament. Sorry to make you all wait. DillHero / September 5, 2010 / Comments Off on 3rd Panel Sept 5th 2010
A 3 day Holiday for some, but not for the family circus. I would like to introduce a new character to the Circus Neighborhood. Shirtless Faris. What a dirty bastard he is.

Faris (the real faris) took a twilight zone approach which I completely enjoy. It shows us once again. Mess with the family, you get the circus of HORROR….. Today Circus Family is finally leaving the beach. Thank God. I decided to stick with the theme of introducing outside characters. Sort of a cross-over of sorts. “Two family trucksters, Only one will survive”. 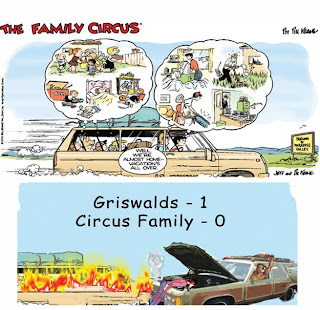 Oh the life of a roller derby announcer

DillHero / August 18, 2010 / Comments Off on Oh the life of a roller derby announcer

On one of our many trips to call roller derby, our handlers (Fari$ Hero and Will the Thrill) decided to film the adventure.

This particular trip was down to Evansville Indiana to call for Demolition City. Brownie and I have been calling for Demoliton City for 3 seasons now. This is on top of our original gig for the Naptown Roller Girls and other teams here and there.

The trip to Evansville from Indianapolis is a magic one. You can’t drive straight through. You start off heading south and then you have to catch a special “Harry Potter” road, I think its interstate 62 and 2/3rds. Then at the 4th rest stop you need to buy a bottle of unicorn tears and put it in your radiator. That helps your car not over heat when you make your 2nd pass around the sun. Then head south some more and you will reach Evansville. Anyway here is the 15 minute documentary. Fari$ had the forsight to edit out the drugs, prostitution, nudity (for the most part) and some other stuff. This isn’t an actual story, just random parts of a great trip.

Rob Reiner and my Hat on the Red Carpet. 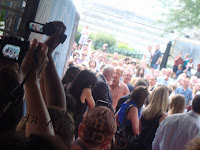 Kerri = Date
Karli = Heartland Pictures rep
(this is to help guide you through my ramblings.)

Our friend Karli asked if Joan and I wanted to go. Karli is now working for Heartland Films as a promotions person, 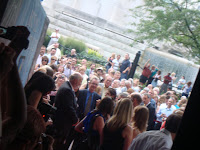 or something like that. Anyway I wanted to go. Joan had practice and her Roller Derby dedication can never ever be questioned as she said she couldn’t miss practice. Naptown does have regionals coming up so I get it but Rob Reiner = Spinal Tap, Princess Bride, Sleepless in Seattle, he was in an old Batman episode, check out Rob’s IMDB Page. Hell while our at it, check out my IMDB listing. Yeah, I am famous.

Soooooooo any way, I needed a date. What better date then Jane Ire’s wife Kerri. I could almost guarantee that my charm and wit would not influence her to put me in an uncomfortable situation when we got to the “goodnight end of date kiss”. We will get to that later.

Besides seeing a Rob Reiner film at a Red Carpet event, my intentions were to get him or someone famous to wear my hat. I was not disappointed. The night was filled with stars like John Mahoney – Frasier’s Dad ,Aidin Quinn, Anthony Edwards, and many more… I saw local icon Patty Spitler. I am sure I didn’t recognize half of the people I should.

The night started out hotter than balls. Kerri and I made our way to will call and found not only our tickets but, the Hilbert Circle Theater on the circle had this new fangled thing called “Air Conditioning” . I am sure it is just a fad but we stayed in the little entry way as long as we could.

Karli was doing interviews of famous people for Heartland films and she wanted to interview “local influencial people”. Cool. So I had my first Red Carpet Interview. 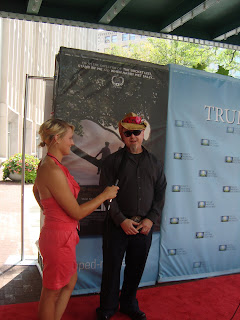 She also Interviewed my hat. That interview was much shorter. 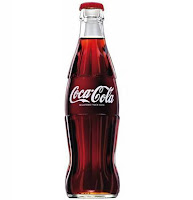 and were drinking them like they were going out of style. In fact, they did go out of style before we got inside. No cokes for us. Damn. We did get free popcorn and that ruled so much. The popcorn was much needed as we hiked to the 3rd floor to take our seats. 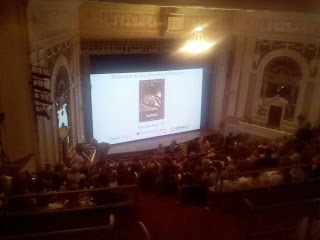 We had the best seats in the house. 2 seats on the side without anyone squeezed around us. 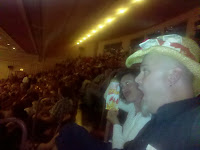 I apologized ,in advance, to the lady sitting in front of us for any crying or overall emotional break downs I may have if the movie went that way.

After some intros and an introduction to the cast the movie began. I had been unsuccessful in any famous people wearing my hat at this point so we settled in to watch the movie. I was also watching the clock. You see, Indianapolis has a tradition of towing that goes way back. My meter said it was free for me to park from 6pm – 9pm. The movie had started late and my time was running out. at 8:50 (about 20 minutes before the film ended) I had to go. I went to my car and up on a post , facing the way I was walking, was a sign that said I was good until 11pm. The sign was only on one side and the meter clearly said 9pm but there it was. So I said screw it and went back to the movie. On the way in I noticed that the staff was setting up Hors d’œuvre Trays. I was going to help myself early and bring a couple to Kerri but they were watching me closely. I returned to my seat to Kerri’s surprise. I explained that it wouldn’t be right to leave her in an emotional movie right before the ending. I also burned up the apology I had given earlier to the Lady in front of us. The movie closed, we laughed, we cried and we hit those trays of food Hard and Heavy. I used my hat as a plate.

I believe the looks I was getting were saying “what an innovative young man” or ” I wish I had a hat”.

So the night was over and still no celebrity hat wearings. So we went outside.

Earlier that evening we had noticed a blonde lady driving a kids Barbie Jeep with a tiny “I-HAUL” trailer attached to it. dis-regard the fellows stealing the stereo

She was just driving around. As we were leaving we saw that she had set her own pink carpet. It had a little house and a backdrop. So we went over to talk to her. Guess who she was. 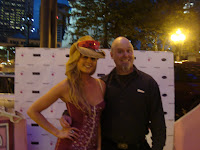 She is self promoting her new thing “Illegally Blonde”.

I invited her to call roller derby sometime.

For years, and I mean years, every Sunday, Faris and I have done what we call the 3rd panel. I wont go into why we picked family circus but we did. Recently we started using these new fangled devices called computers. No longer are the days of drawing the “3rd Panel” on a half used piece of toilet paper. No pencils no running out of ink. Welcome to the electronic age. Well here we are. For your enjoyment. Our first 2 electronic 3rd panels. 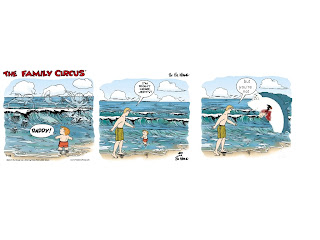 The Rules:
1. we cannot look at each others 3rd panel until it is done
2. Thats it.