I was on my way to the coffee shop this morning and I noticed something that has apparently been there for a while and I just never noticed. CLOWN PLAZA. It is a sign in front of a strip business office center. What in the hell is Clown Plaza? Is it where clowns have law offices and karate studios? I just don’t get it. The funny thing is this thing is close to my house. That being said, Joan of Dark (my lovely wife) is scared to death of clowns. If I were you I wouldn’t dress up as a clown on a lark and try to scare her. The joke would be on you. She isn’t the kind of girl to curl up and ask why in a whispery voice as her mind shuts down and she visits a special place that keeps her safe. She is the type of girl to beat and possibly kill what would cause her such fear. Joan of Dark – Clown Hunter. Now that would be a comic. Although I don’t think she would actually hunt clowns. Maybe Joan of Dark – Clown Defender. Well that makes her sound like the clown lawyers that would have an office in clown plaza. Hmmm.

Well whatever it would be called, it would rule so much.
How do I feel about “Clown Plaza”. Well, I do not fear clowns. I have, however, feared a certain clown.

The setting: 3am, Bourbon Street, New Orleans, America. The night was dark and wet. The rain had tried in vain to clean the nights festivities away. What was left behind was a thick wet humidity. The street had turned into a grey and brown running gutter water, old cups, cigarette butts and what drunk people leave behind in gutters, soup. Gross. The rain also left behind a clown. A full blown bright make-up, big hair, red nosed, big shoe, cigarette smoking clown. 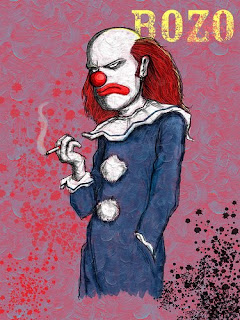 This may come as a shock but My friends and I had been drinking. One of my friends looks over at this clown (who is sitting in a strip club doorway) and says, “what kind of degree do you have to have to be a clown on bourbon street.” The clown looked up with has big painted smile, exhaled and said, ” I’m going to kick your ass.” I said “you must be a sad on the inside kind of clown.” He jumped up without a squeek or any pop up flowers and the chase began. He was using humor to try and catch us. We were laughing so hard he almost caught me. All I could hear was ‘KATHWAP – KATHWAP -KATHWAP – KATHWAP’. It was the sound of giant clown shoes slapping the wet muck of Bourbon Street. Lucky for us the shoes were enoughh to slow this HELL CLOWN down. He was leaning back like you would imagine a big shoe clown running, so as not to trip over his size 42 shoes. We narrowly escaped with our lives. All this for “clowning” on this guy. get it? hahaha. sorry for that . Anyway, the moral of this story. Do Not Fuck With Bourbon Street Clowns.